Disc Room is a new game expected to be released in 2020. Already the game trailer has made waves, thanks to its innovative game plot. This is an animated fantasy game that involves a lot of violence and bloodletting. The game involves a room with discs. These discs have sharp blades and are spinning. You can imagine what would happen if this disc touches you. Yes, you guessed it right! If the disc touches you, there is going to be a lot of blood and gore. The spinning disc can slice anything that comes in its way.

In this game, you need to tackle the spinning discs, and there are rooms full of these discs. The game trailer shows many such rooms that you need to traverse through to clear the rooms. This is an exciting game that comes to you from the same indie developers who gave you the popular game Minit. The developers are a group of talented individuals- Kitty Calis, Jan Nijman, Terri Vellmann, and Doseone. The game is published by Devolver Digital.

The game is set in the future in the year 2089. There is a giant disc that orbits around the planet Jupiter. The disc is, in reality, a building that has disc rooms within it. These disc rooms have spinning discs with sharp blades. The discs can cut you in two in a second. This is not all in this terrifying game of discs. Some of the discs have special features and can fire discs at you. Some discs come at you slowly so that you can take action. Others come at you with blazing speed.

There is also a darkish room where the spinning discs await you. In short, this is a horror game where discs are waiting at every corner with the intention of cutting you into pieces. Evading the discs and taking them on is what the game is all about. It is not just about discs; other interesting elements are included in the story as well. You are a scientist and enter into the disc room in a spacesuit, and you need to unravel the mystery while protecting yourself. 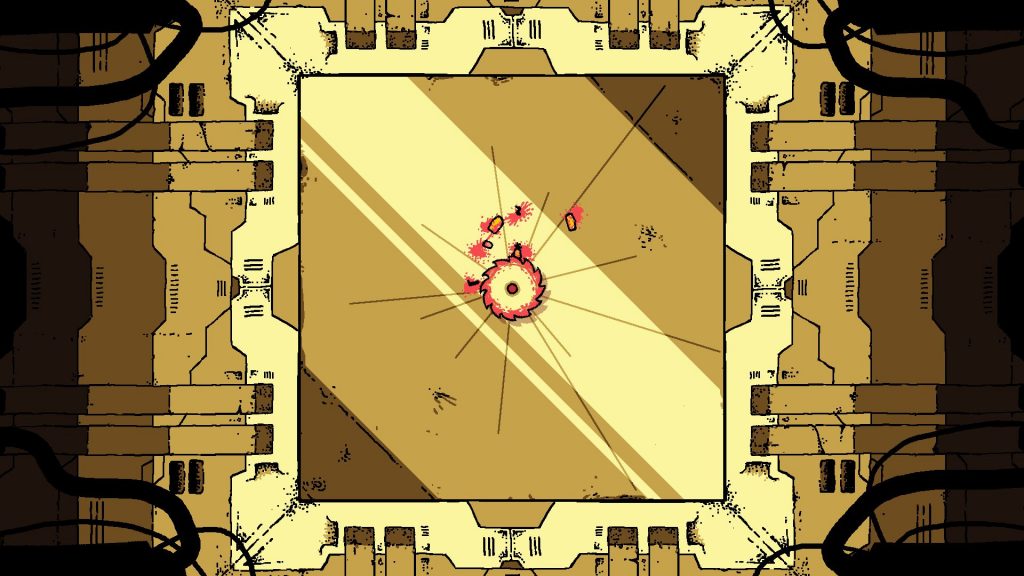 An interesting snippet that the developers have projected has created a lot of interest in the game. As you would have realized by now, the spinning discs in the game are vicious and can easily kill you. What kills you will make you strong! Yes, this is what the developers have indicated in the game trailer. This is likely to be a key element of gameplay. When you are killed by the discs, there is likely to be some learning that you can take as you move forward in the game. This is an eagerly anticipated feature in the game.

If we look at the disc rooms themselves, they seem to be square and have more than one exit. The gameplay is likely to focus on clearing the rooms quickly by selecting the right exit while avoiding the blades of death. There are puzzles in the game that can help you take the right route and move quickly to avoid death. A very interesting gameplay element is the addition of a timer! Some rooms have a timer. Not only do you need to escape the discs, but you also need to do it before the clock runs out, creating more challenges. This challenging game is sure to be one that meets your expectations.

This is what the game Disc Room is all about: