Adventure games are highly known for their serene, vibrant, and pleasant graphics with charming music. This article will highlight the details of one of the most popular adventure game called Night in the Woods.

Night in the Woods – The game

Night in the Woods is an adventure and exploration indie game designed in an anthropomorphic-style that was released in early 2017 on 21st February. The game was developed by Infinite Fall – founded by Alec Holowka, a game designer and Scott Benson, an animator/artist, and published by Finji.

Night in the Woods is a single-player adventure game. The game is available for – Nintendo Switch, Xbox One, PlayStation 4, iOS, Mac OS, Linux, Windows.

Night in the Woods is a huge story-driven game about a 20-year-old woman named Mae Borowski, who quits school to reconnect with her past life by returning to her hometown, Possum Springs, a small mining town that faced an economic crisis when she was away. With everything being changed, it leads to the unraveling of certain secrets, which she and her friends take on the journey to solve them.

Margaret Borowski, also called Mae, is considered a delinquent and a kid by the people. She and her childhood friends, Beatrice Santello as Bea, Greggory Lee as Gregg and his boyfriend, Angus Delaney, teams up and wanders into the woods to dig and solve the mysteries of their town. This game revolves around the themes of sociopolitics, sexuality, a slice of life, abuse, and death.

The gameplay of Night in the Woods

Here is all you need to know about the gameplay of the indie adventure game Night in the Woods:

The beginning of the game moves at a slow pace where Mae notices the changes and the run-down condition of her hometown, Possum Springs, where most of the stores and shops were closed and out of business. After her arrival, she meets her best friends and also learns about the mysterious disappearance of her friend, Casey Hartley. Mae begins to explore the town and interact with her neighbors and friends. Many mysteries and puzzles are hidden in the town that make Mae and her friends group up and solve them together.

As you proceed further into the game, you’ll find out the reason why Mae quit school and of how her friends are coping and dealing with their own lives. This game will allow you to live Mae’s life and direct her as she begins to settle in Possum Springs. Mae wanders off into the woods in the hopes of finding unanswered questions and stumbles upon a cult that was solely responsible for the mysteries and events. As you delve more and proceed further into the game, you’ll learn and understand more about the insights, themes, characters, and the game. 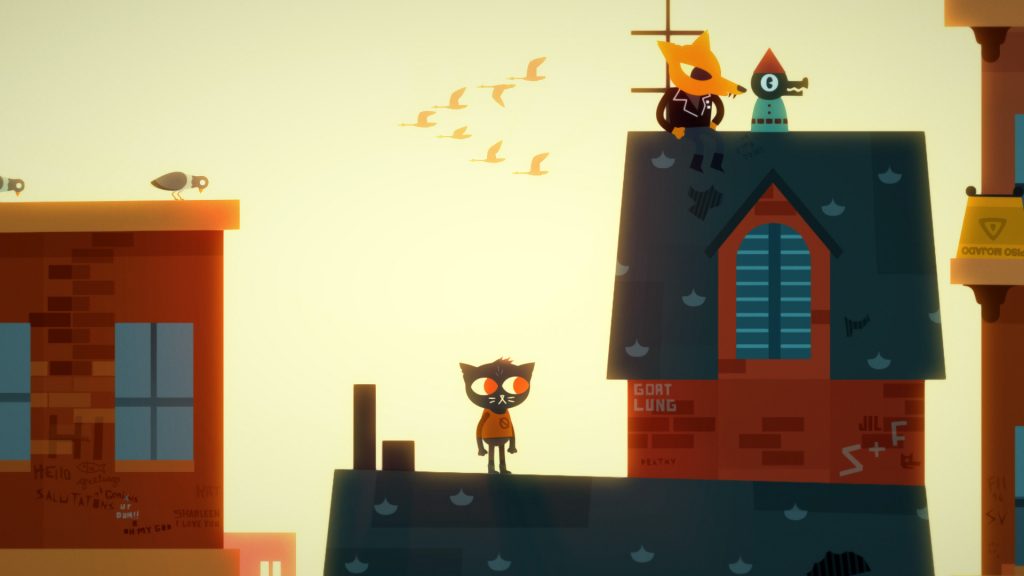 Is it worth playing?

Night in the Woods is not just a classic adventure game, but the feature of letting the player interact with dozens of characters and explore the game to its full potential is the spotlight of this game. It is not just a game to play but an insightful experience of life as it deals with growing up and becoming an adult by being responsible.

Mae, the main character, learns the harsh realities of life, and struggles to find the pace and life she once lived before she left for college. It is a very interactive game between the characters, which also leads to quests, solving puzzles, and exploring the woods. Although you may not experience similar feelings with everyone or find it relatable, you’ll gain a lot from this game and find it surprisingly interesting.

Night in the Woods mainly focuses on the story and the impacts it has on the characters. The realistic dialogues, powerful conversations between Mae and the citizens of Possum Springs takes this game to another level of experiencing an adventure game.

Night in the Woods is a promising game that stands a chance to get into the list of top games. After reading the article, if you are interested, you can watch the official trailer to see the game in action. Get yourself a copy of this amazing and overwhelming game from the store and plunge yourself into a mysterious story-driven game.