A bunch of bunnies vying for control over a mechanized, imposing turret, which in turn lets them impose their will over their brethren — if there’s even been a playground for complex, underlying psychological manipulation, we haven’t seen it. Daniel Dez’s OBEY revolves around implicit modes of suggestion and dominance. In a game where an all-powerful turret can decimate other bunnies in  a second, but can’t even load up its own special ammo or build fences, the player needs to incentivize and negotiate rewards with the bunnies not in power. And those start to betray each other, only to sneakily oust the current tower controller, in the end.

We caught up with developer Daniel Dez about his ongoing Kickstarter and the game itself, an interactive experience he’s been molding in his head for well over ten years. Dez shares insight into how much symbolism goes into the art behind his multiplayer game, the reality of the mobile vs. PC gaming market, and the devious strategies his playtesters have been coming up in OBEY‘s structured yet freeform gameplay.

Indie Game Magazine: How has the development and the Kickstarter been going?

Now if it fails, it doesn’t mean I won’t deliver some of the same things, but I’m not promising anything. I’m just going to do whatever I can or feel like it, or if something happens in my life, whatever, I get a job, maybe I’ll do it, maybe I won’t. I’m going to release something. That’s the scary thing for me now. I’m not certain that the audience is there, because on one hand, I’m not sure that they’re not pledging because of that, maybe they think it’s too high, or whatever, but on the other hand, if the players are there. So that’s my fear right now.

But I think the game is worth making. I’ve wanted to see this game made and played, I’m doing what I want. That’s kind of where I’m at with it.

IGM: Let’s go back to the beginning a bit. Tell me a little about when you went indie and what made you do it?

DD: My last studio job was at Kaos Studios. I started working there in like 2005 or 2006 and it was around 2008. Frontlines: Fuel of War was wrapping up. I was one of the first people hired at Kaos. There was nothing. There were no tools. They put me in charge of the environments. And there was no pipeline, nothing. We didn’t even know if we were using 3D Max or Maya. We were using Unreal 3 and so I started making tools. That grew, I was a deep part of Frontiles: Fuel of War, and when the game ended, I was getting married, and I was moving.

I knew I wanted to be indie, and I thought it was a good opportunity since I had to move anyway, so I just didn’t take another job. I had some contracts after that, but pretty much when I left, that was it. I never went back to another studio, and I just made my own games. Then I had a big success – I was pretty much the main developer on GunApp for the iPhone. It had like six million downloads. I used the success from that to stabilize myself and basically fund the beginning of OBEY. That’s what brought me through those ten months that I’ve been working on it.

IGM: You’re coming from mobile back to the larger screen. How do you feel about this shift, and what are your thoughts on mobile vs. non-mobile?

DD: Near the end of GunApp, I felt like it was so saturated. I put out a couple apps besides GunApp, but they all basically disappeared. I don’t think it’s a coincidence. It’s so hard to make it in there, and not just that, but your customers are not people that know you or care about who’s making the game. It’s not like I can say, “I’m the developer of GunApp, buy this app.” Because it’s not the same as PC, and PC really is my roots. I like PC gaming personally. I have all kinds of devices, I mean, I’m a developer for mobile, so I have like, every device, and I don’t use any of them. My phone is one of the old-school ones that doesn’t have anything. The brick phones. I’m not really that kind of gamer. 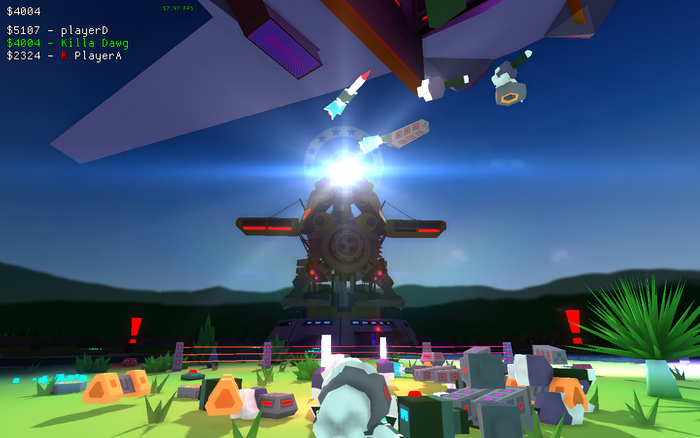 IGM: Seems like you’ve had the idea for OBEY for a very long time.

DD: Yeah, like 2002 was when I had the first thoughts of OBEY. Originally, it was going to be just like a king of the hill type of game, where you can hide in the shadows. I actually started the game a long time ago using the OGRE Engine, but I was doing that on the side, as part time. It took so long that technology changed, things changed. I ended up throwing it out because everything I had done felt outdated. And then Unity came out, and I thought I’m gonna do it again in Unity. For me, it was the right choice, just because I’m alone.

IGM: Do you recall what inspired you in the first place?

DD: That’s a good question… I think it was just something I’ve never seen before, but I mean the idea of coercing the players, what is the meat of the game now, came later. I think that is important. That became the most important part of the game. Originally, it was just about hiding in the shadows and subverting whoever is in the tower. That was the basics. That’s kind of the basic gameplay, still. It’s not really what differentiates the game the most.

What differentiates it the most is that instead of commanding AI units around or heroes, peasants, whatever, you’re trying to command and control other human players. That to me is what really makes this a unique game.

IGM: OBEY says a lot about authoritarian systems. How does the gameplay explore those?

DD: What ended up becoming the centerpiece of the game is this, in essence: I wanted the emergent gameplay that came out of it to mirror the way that people are upholding authoritarian structures in real life. I wanted the gameplay to function just like power structures.

For example, maybe the robot killed me with the rocket. But I loaded that rocket myself into the robot. It’s just like I pay taxes so that the NSA can spy on me, for example. The guy that got killed by police, he paid taxes for that, he paid that policeman salary. So that’s one example how the game mirrors real life. Maybe I won in the game, but I did it in no small part by coercing the losing players to giving me points even though they knew I was winning. 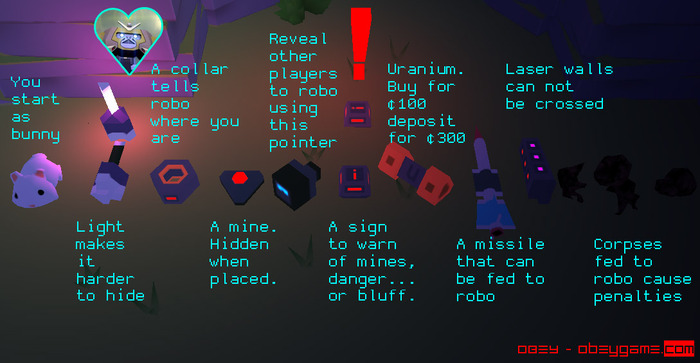 Players betray each other in OBEY, even though both of the betraying players are vulnerable and they’re in losing positions, so they are basically fighting over scraps, trying to win the favor of the winning player even though they’re also opponents of the winning player. The winning player is not their ally. They’re fighting with each other. Or when players will basically be capo against one another. He’ll expose another player to the person in the robot, even though he’s not friends with the person in the robot. But this is kind of like how it happens in real life, a real sad example of this would be concentration camps, anywhere where people are executed and mass murdered. Who buries the people who were executed? The people who bury them are the ones about to be executed. They’re just buying time so they’re burying these people. And they’re doing the unnecessary job of the execution.

Also, players in the game will often be superficially helpful. They’ll be like “oh yeah, I’ll bring in rockets, I’ll bring you the stuff,” whatever the robot is asking, but they’ll also be bringing the dead corpses, in other words, doing subversive activity [remains of bunnies burned by the flamethrower give the robot penalties if deposited in the box].

One thing people did spontaneously, they’ll build a little fence somewhere that’s hidden to the robot, and they’ll create a body factory. They’ll create bodies by sacrificing themselves, and then the other players will take those bodies and put them in.

Anywhere the robot can instill fear with his light, that is where his structure of power is always in place. But anywhere where there is no fear, if there’s no light or he doesn’t know where you are or what you’re doing, that’s when the structure of power begins to collapse for that player.

Luke has wide interests in games, from compelling fighting, action, and RPG titles to deeper interactive, storytelling titles that push today's genres and boundaries - especially awesome if they're related to diversity. Feel free to reach out on Twitter or via email.