A Detailed Review of PUBG Mobile

by Ryan Brown
in Reviews
0

Possibly the most-played game in the world today, PUBG – Player Unknown’s Battlegrounds – already has over 200 million downloads. From 2017 to early 2018, the developers (PUBG Corporation by South Korea’s Bluehole) released the game on the PC. But in 2018 – on February 9th 2018, to be exact – the company launched its PUBG Mobile version. Now, the biggest, bloodiest, and best battle in the world could be played on the small screen.

If you’re planning on moving from PC to smartphone for your daily dose of PUBG, then you should definitely read our exhaustive review.

Features review: What PUBG Mobile offers and what it doesn’t

One of the reasons for PUBG Mobile’s dedicated fame and following is its amazing compatibility with all types of phones.

Yes, the game does perform better on larger and more powerful phones like the Samsung Galaxy Note and iPhone XS. However, even smaller and less powerful smartphones like Nokia and Motorola X can also support the game very well. (Of course, in saying this, it’s important to note that the mobile game is not supported on old phone models and un-upgraded software. Even if it does load, there is the risk of the game crashing.)

The PUBG Mobile version is supported on any smartphone that has a minimum of 2GB RAM and is up-to-date with its general software updates. The graphics aren’t compromised, and the functionality of the game is also smooth and hassle-free.

Now, we come to the game’s in-game features.

PUBG Mobile comes with the standard location/map that’s available on the PC version. Players land on the fictional, military-controlled, 8Km*8Km Russian island of Erangel on the Black Sea. The prime locales of the map are also available on the mobile version, such as the burnt nuclear power plant, the isolated military base, and a host of other locations.

In the early edition of PUBG Mobile, developers hadn’t built the Mexico-based Miramar desert map, making Erangel the only arena for the entire game. Thankfully, this has changed now. We’ll expand on this a little later.

For now, know that location-wise, PUBG Mobile is exactly the same as the PUBG PC.

There’s no need to worry about how you’re going to defend yourself on PUBG Mobile. The mobile game comes built with almost all of the weaponry that’s available in the PC game. Different types of shotguns, designated marksman rifles, assault rifles, sniper rifles, light machine guns, submachine guns, handguns, crossbows, melee weapons, grenades, and cocktails are all available.

Similarly, PUBG Mobile also comes with most of the vehicles that are available in the PC PUBG – motorcycle, UAZ, buggy, Tukshai, scooter, Rony, aquarail, and PG-117. The minibus, pickup truck, and Mirado are not available on the mobile because they are only available on Miramar.

PUBG Mobile has quite a few game modes on offer. There are three game modes available – Classic, EvoGround, and Arcade. The Classic game mode offers the exciting Miramar map. You can also play on Sanhok and Vikendi, apart from Erangel, in the Classic mode.

The best game modes on mobile are the four Arcade modes – War, Sniper Training, Mini-Zone, and Quick Match. Arcade also features a smaller battleground with lesser players compared to the other two modes; so, this keeps things interesting. The EvoGround also offers nice maps, like Warehouse and Zombie’s Darkest Night and Survive Till Dawn 2.

Recently, PUBG Mobile released two Training Ground maps for beginner players who aren’t yet confident playing on the primary arenas. Here, players don’t need to engage in any fighting. They can use the time here to practice their weapons, drive vehicles, and explore their surroundings. Additionally, there’s a buzz going on that a brand new map called Ruins will be introduced for the Season 10 Team Deathmatch mode.

The touchscreen controls – virtual joysticks – of the PUBG Mobile game are pretty smooth. There’s no real problem of the controls getting glitchy or unresponsive.

The game is well-supplied with all types of controls on smartphones, and you get weapon controls, voice controls, and text controls. There’s also a tiny map of the entire island on the screen. Yes, this does tend to clutter the screen a bit, and it can get annoying after some time, especially when you’re in the midst of a tense battle, and a notification box pops-up suddenly, obscuring your view. Or, if your finger accidentally grazes one of the controls (a real hazard on smaller screens) and you end up making moves you didn’t want to.

But the makers of PUBG Mobile have found a solution. The game’s interface is customizable – you can move the map and controls around the screen and reposition them according to your comfort. Players can also connect a Bluetooth keyboard and mouse to the phone and then play.

The shoot button is very intuitive. It floats up/down to the spot where you last placed your finger. So, if you have any finger/screen-spot preference, the shoot button will position itself there, making the game easier to play.

As for controls to pick up and sort weapons, clothes, and vehicles, just walk into them, and everything gets automatically picked up and sorted into the right category.

This is where minor problems start to surface with the PUBG Mobile game. It isn’t that the mobile game is difficult for groups to use; it’s more about coordination on-screen.

The PC PUBG game offers a long-view of the battlefield, and this helps players find good hiding spots and vantage points. So, anytime a vehicle approaches the perimeter or an enemy is in your line-of-sight, you can easily coordinate with your team to finish them off.

But, the mobile version has been designed to show a mid-range and close-range view (to make the best use of the smaller screen space), and this can create problems for players working together in a group.

It’s difficult to see who’s standing where and which direction the rifles are pointed towards. So, making a coordinated attack is a bit of a challenge. This is where talking on the mic helps. PUBG Mobile also allows players to talk to other teams in their match by activating the “All” option on the microphone.

Of course, the mic too brings with it a few challenges. Sounds of players tapping on their screen or accidentally brushing their hand against the microphone or coughing loudly are amplified, and they affect audio integrity during the game.

Another option available for coordinating gameplay during the game is the text message feature. PUBG Mobile has built-in phrases like “Enemy Ahead,” “Help,” and so on, which can be tapped and sent to all team members. You can even use the custom text box to type out your message to your team. 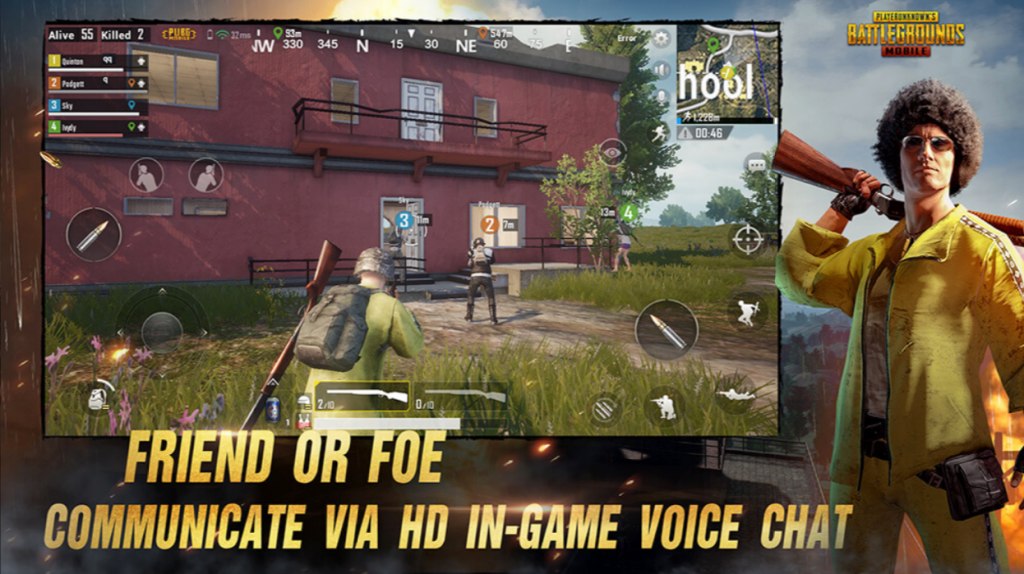 Another area where the PUBG Mobile game fails to impress is its general performance and graphics.

In terms of performance, the mobile game does have a high frame rate drop. In fact, sometimes, the screen seems especially slow or glitchy when you’re parachuting down, or you’re using some other vehicle or weaponry. But thankfully, this doesn’t happen too often.

Game audio too deserves mention here. You can’t hear footsteps or bullets with as great precision as in the PC version. This can make the game more confusing and challenging.

When it comes to graphics, the mobile version of the game looks like a hand-me-down version of the PUBG PC. The images are not as colorful; they’re a tad grainy, and the locations, characters, weapons, and vehicles don’t look as lifelike. But this is to be expected given that smartphones can’t support the hardware requirements of the PC-quality game.

At least, it’s not as bad as the PUBG Mobile Lite.

Well, now that we’ve mentioned it, we might as well talk about the Lite too.

The PUBG Mobile Lite version has been developed specifically for very low-end phones with minimum hardware support and limited internet connectivity. You need a minimum of 2GB RAM to run the game – 491MB to download and 590MB to store.

In terms of game modes, the Lite offers only Classic (Erangel only) and Arcade (War after Level 10) options currently. Right now, the Lite is available only in Asia and South America; plus, it’s only available on Android phones.

The gameplay is a little better on the Lite. Players have a few benefits that are unique to the Lite version – bullet trail adjustment, aim assist, map optimization, enemy location display, extra time to make a kill and self-heal on-the-move.

Concerning weapons and vehicles, the Lite version does offer most of the options available in the mobile version. But a few of the equipment are missing. Graphics, as discussed, are pretty poor compared to the PC version. But this is excusable.

Currently, the Lite version doesn’t have the Crews and Clans feature. But it does offer a Winner Pass in place of the Royale Pass.

If you’re judging the PUBG Mobile game against the PC version, it does fall short. The game is a lot clumsier and not as aesthetically captivating as the PUBG PC. However, if you evaluate the game on its own merit, it does have a lot of good qualities. The controls are pretty great, and the graphics are good enough. The mobile version offers almost the same gameplay as the PC version while demanding much lesser network and hardware support.

So, overall, we feel PUBG Mobile is a good investment.