In the rampant world of action-adventure games, Itch.io recently released a game developed by nine bright and wide-eyed student developers from the University of Pompeu Fabra. Coming straight from Spanish grounds, the students, or as they like to call themselves – Katana Productions – took to Itch.io to release their first-person 3D game of action and adventure. They originally developed this game as a final project for their Master’s course in Creation of Video Games.

Arkanum is set in the fantasy world of a marvelous castle. With goblins, magicians, fireballs, and magic, Arkanum shows off a cel-shaded art style. Mimicking the design style of a comic book or a cartoon, graphics of Arkanum appear with a paper-like texture, thus giving it that sketch-like feel rather than appearing as plain objects in the user interface.

The vivid and very saturated colors make for a fantastic feast for your eyes. It makes playing the game an adventure and a pleasure. A compelling and riveting action sequence, the game is developed in the custom game engine of C++ using the DirectX11 graphics API. The instilling sound sequence in the back, which changes with every twist and turn, makes it an even more thrilling adventure.

An adventure of magic and riches

Arkanum is a light yet intriguing game of mysteries and adventure. Not to be fooled as ‘yet another game developed by students,’ Arkanum boasts of a fluid first-person gameplay. The hero of Arkanum is ‘Thief,’ a character you play while sneaking into a castle of fantasy, mystique, and most important of all – treasure!

The game takes the player on a thrilling adventure, fighting goblins and magicians that are put in your way to increase complications. They make you earn the treasure you are seeking. After all, nothing comes easy. And when there is gold involved, you really need to sweat it. Jump over complications thrown your way and reach the doors in time – they open and close at their own magical will. Not every door is meant for you to venture into.

The spirits and magicians in the game talk to Thief, thus making it seem like you are inside the gameplay. The tone and accents used to make conversation are very clear and easy to understand, thus making your adventure run not only thrilling but just a little bit easier too. This is so because you are easily guided through how to use the weapons that you equip yourself with on the way. You need not go through a long instructions manual. Simply listen to the spirit!

You are in for a magical havoc

By making use of the magical powers of attraction and repulsion, Thief gets to sneak through the wondrous castle and take objects that possess even the slightest trace of magic. The power to pull and push is instilled in you with the help of uber-cool gloves. When wearing these aesthetically designed power gloves, you feel like you can take on the fiercest goblin and the cruelest magician. And what’s cool is that if you are smart enough, you can! 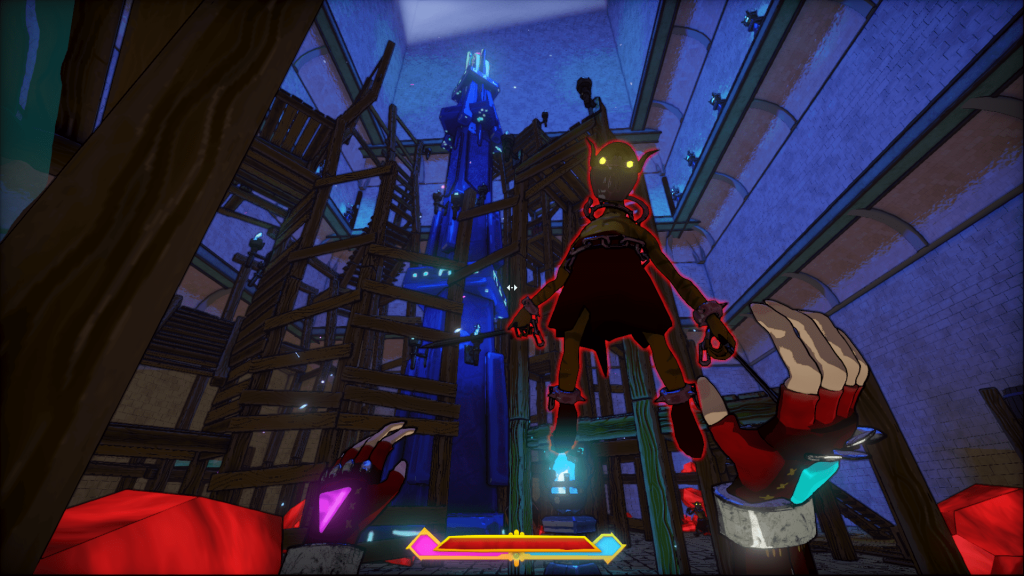 As Thief, you get to wreak havoc inside the castle and do anything in your power to retrieve magical objects and then sell them to make a fortune. Magical objects get flung left and right while goblins attack you with the sharpest swords. See for yourself if you can defeat them (or maybe just outrun them!) and ride to victory and riches. Were you able to handle one goblin easily? What happens when five of the fiercest goblins come running at you? What do you do then?

Will you be able to handle the magical complications, or will you spiral out-of-control?

The game steadily picks up speed and makes every new adventure more intriguing from the last one. Keep your eyes peeled for the new magical complications that are about to be thrown your way. If you thought fighting-off goblins was tough, wait till you come across the mystical magicians. What will you do when six of them come charging at you? After all, they are there to protect what you so passionately wish to steal. Would they give away the treasure so easily?

Will you fight-off the goblins and magicians and steal the magic, or will you succumb to their mystical prowess? Download the game (for free!) from Itch.io under the Katana Productions listing and find out for yourself.