Insomniac Games has continued ‘The Schmelling Incident’ – the catastrophic cosmic event in Seedling – and released Strangelets. Seedling was their 2018 AR (Augmented Reality) game, which is essentially the backdrop for their newest and final Indie Project – Strangelets. Aliens from across the wide and mysterious galaxy have gotten trapped in pockets between dimensions because of ‘The Schmelling Incident.’ It is now up to the players to find aliens in dimensional cracks, provide a safe place for these galactic creatures, and care for them.

Coming from the creators of Marvel’s Spider-Man, Stormland, The Unspoken, and more, Insomniac Games has brought Strangelets to players worldwide via Magic Leap World. Strangelets is the last Indie venture by Insomniac Games. They recently announced that they had been acquired by Sony Interactive Entertainment.

One of the most experienced gaming studios, Insomniac Games, developed Strangelets by harnessing the potential of augmented reality platform. They utilized gaming space not just in the virtual gaming world but the real physical world around us too.

Strangelets is a thrilling and charming weave of going on adventures, exploring the unexplored, and rescuing strange alien creatures. It even takes into account your current time zone and the weather conditions around you to bring to you a game which is the definition of real-life adventure on a whole other level. 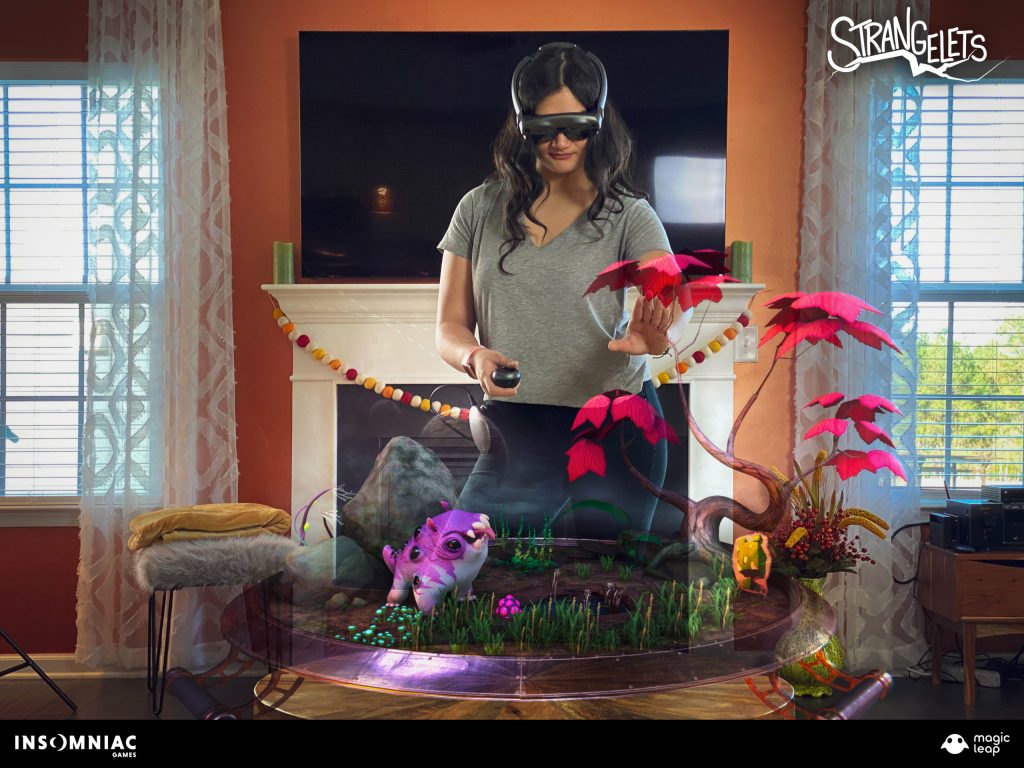 Search your homes for dimensional cracks

Want to explore your galaxy and more, but can’t do so? Wish you could venture into the stars and beyond and find out who lived amongst them? In this augmented reality game, you can go on adventures (quite literally!). Set against the background of your own home, create an augmented reality of strange intergalactic aliens and their homes.

‘Bulby’ is your mysterious yet adorable nonetheless companion from galaxies beyond. Bulby accompanies you while you search your home for any dimensional cracks or splits. If you happen to come across one, you then need to reach inside these rifts and rescue strange and mysterious aliens.

What’s real and what’s not? It’ll be hard to tell

With the game adjusting to your current time zone and weather conditions, the feeling of reality is enhanced even more. Real-world objects near you are transported into the augmented reality gameplay area. These real-world objects are used by players to harvest energy and care for their collection of strange-looking alien creatures that they have rescued over time from the dimensional rifts.

The thrill of not knowing what is about to happen next will drive you to the edge of your seat. You would not be able to sit still wondering which new alien creature is hidden inside your kitchen cabinets or behind your couch. Will you be able to find them all? Would you be able to care for them all?

It is now up to you to prevent galactic ecosystems from getting destroyed. Strangelets weaves together a heartwarming story about friendships and companionship in your imagination and unfolds it against the backdrop of your real world. All of this happening alongside your companion, Bulby.

The thrill of creating ecosystems in your augmented reality

This is an amazing game that allows you to understand how much you can create from the environment surrounding you. Not just create, the wonder extends into watching how the characters created can interact amongst themselves and create a thrilling gaming experience for you.

Each object and character that has been created in your augmented reality stays there even when you leave. Even if the headset comes off, creatures keep growing in the augmented reality and your headset. Strangelets, along with its predecessor, Seedling, was conceived especially to explore and harness the magic of spatial computing.

A game full of wonders and surprises

Your real world would start feeling lackluster when you no longer see adorable monsters running around all day. But fear not, the reality you have concocted stays alive even when you take the headsets off and take your rest for the day. Get some rest, recharge yourself, and the next day, the beautiful galactic ecosystem you have created for your aliens is right there, having grown even more than before.

Playing Strangelets encourages players to physically move around in multiple rooms and maybe even venture outside of their houses if they wish. Familiar spaces in your houses are turned into thrilling game areas. You will marvel and be surprised at the discoveries you make that have been hiding in the crevices of your houses all along.